Brexit and the case for Scottish independence

OK, let’s all just calm down. Here are some things that we know as fact 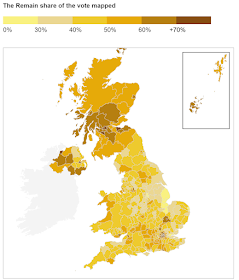 So: in these circumstances it is completely reasonable that the SNP should explore ways of securing a separate EU deal for Scotland, up to and including revisiting the question of Scottish independence.

It's important to consider that some interesting options might be available for Scotland without becoming independent. We will hear much in the coming months about the Greenland and Faroe Island precedents, but frankly these are not overly relevant - the bigger point is that we are in uncharted territory for the EU so precedents are of limited value. At this stage we simply don't know what might be negotiable and it makes sense to explore all options (as Nicola Sturgeon is quite sensibly suggesting).

We live in extraordinary times. As I write this the Tories have a lame duck leader, the chancellor of the exchequer has gone to ground and the Labour party is in melt-down. Meanwhile nobody knows what Brexit is actually going to mean because negotiations with the EU haven't even started yet.

If ever there was a time to pause and reflect and just wait to see how the dust settles, it is surely now.

So let me just park a few inconclusive observations here.

One school of thought I'm hearing on Twitter can be characterised as follows:

This is an understandable emotional reaction, but the economic cost for Scotland leaving the UK - if you prefer, the courage required - is an order of magnitude greater than that for the UK leaving the EU.

Scotland currently receives an effective fiscal transfer from the rest of the UK of over £9bn pa (see chokkablogs passim and even the SNP themselves during the fiscal framework negotiations). If we scale that in UK terms it would be the equivalent to the UK receiving £90bn pa or £1.7 billion a week.

If you'd plastered "Vote Leave to lose £1.7bn a week" on the side of a big red bus you might have seen a different EUref result. The economic cases are not comparable1.

A more rationally structured question might be
In the immediate aftermath of the EUref result Sturgeon seemed to be framing another indyref as a chance for Scots to vote to "stay in the EU" as much as "leave the UK" -  but we don't yet know whether Scotland staying in the EU is even an option.

Would member states who have independence movements within their own countries want to create this precedent?

Scotland doesn't have its own stable currency and our stand-alone deficit (as % of GDP) would be larger than any existing EU country - so even if the EU made a remain option available for Scotland, it is likely to come with some pretty significant conditions. Are we ready and willing to join the Euro? Would we be willing to slash public spending by over 15% if the EU made this a condition of remaining?

Of course it's also the case that it's not clear what remaining in the UK looks like now. Will the fiscal framework that currently guarantees us that £9bn fiscal transfer survive the repercussions of Brexit?

If we voted to become independent now there can be little doubt that borders would be involved; borders between Scotland and the market where 64% of our exports go.

Currency remains a huge question - what EU deal could we secure if we planned to continue to use sterling? Do we really want to adopt the Euro if one of the implications of Brexit might be the meltdown of the Eurozone - would we be voting to jump out of the frying pan and into the fire?

I gave up fighting the label of being a "Unionist blogger" a while ago, but my position has always been that defending the Union was a position I arrived at, not one from where I started.  So until we know what options are on the table and - is it too much to hope for? - we've heard them honestly presented, I have no idea what my view on a possible indyref2 would be.